From Wolf,  1 Great and 2 Cory's Shearwaters. Also seen were 5 Storm Petrels, 2 Manx Shearwaters, 5 Fulmars and a few gulls. Of the 314 seen, 3 big congregations of Gannets numbering 50+,100+, 100+ were seen diving presumably with distant dolphins. In St Mary's Sound 120+ Shags were feeding together. 4 Common Dolphins had been seen close to the ship.

From Wolf Lighthouse to Penzance numbers increased. A much under-counted 685 Manx Shearwaters streamed past both sides of the ship, as they flew from The Lizard across Mounts Bay and around Porthgwarra. Also seen 4 Cory's Shearwater, 5 Storm Petrel, 9 Fulmar and 3 Kittiwakes. 314 Gannets again included 3 feeding frenzy flocks of up-to 70+, the vast majority of which were adult birds. 1 Puffin and 2 Razorbills were the only auks seen on the trip. 5+ Common Dolphins came to the ship delighting passengers. 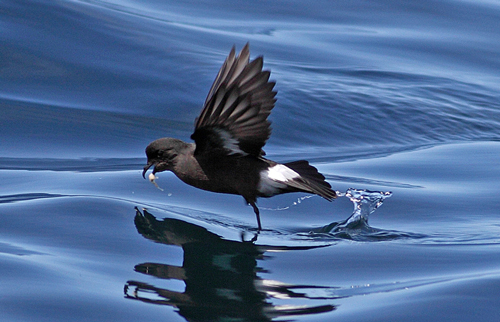