Seventeen species of seabird have been reliably documented as breeding on the Isles of Scilly: Manx shearwater, fulmar, storm petrel, shag, cormorant, great black-backed gull, lesser black-backed gull, herring gull, kittiwake, common tern, Arctic tern, roseate tern, sandwich tern, puffin, razorbill and guillemot (there are also three records of breeding by black-headed gull involving one or two pairs in late 18 and early 19 century but not since). Today thirteen species regularly breed. Fulmar has colonised the islands and sandwich tern, Arctic tern and roseate tern are now lost as breeding birds. The fortune of the kittiwake also remains in the balance and it could too soon be lost as a breeding bird on the islands once again.

Early accounts indicate that at least in the 1800’s the numbers of seabirds breeding on the islands were substantially higher than today with the overall seabird population potentially running into 100,000’s of birds. From 1969 onwards there have been four major co-ordinated seabird counts on the islands. Today the overall population is fewer than 20,000 seabirds on the islands, and still declining (25% since 1983). The four regularly breeding species of gull and the common terns have shown the largest recent declines of any species.

Since 2006 in addition to regular counts on some islands such as Annet, productivity monitoring has been carried out on a sample of species and islands.

A brief summary of the status of the seabirds breeding on Scilly (2006).

2Based on only two counts using comparable (tape-playback) methods.

31st May 2013: The annual seabird count on Annet took place today, led by Dr Vickie Heaney on behalf of the Isles of Scilly Wildlife Trust and IOSSRP. Jaclyn and Bob joined volunteers Darren, Matt, Julian and Colin.  It was good that the weather was not too hot as this meant the impact of disturbance was kept to a minimum.

1st June 2013: On Gugh, Bob assisted Dr. Vickie Heaney with surveys of the Manx shearwater burrows on the island. Several occupied burrows were found, and one was suitable for a trial using one of our new trail cameras. Careful placement means that birds are able to land and approach the burrow unhindered – very important when you have to shuffle like a shearwater - and can also take off safely when leaving. Let’s hope we get some images of shearwaters and not rats! 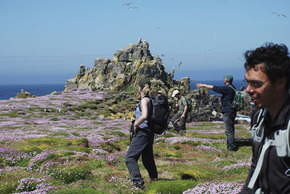