Seabird population changes are driven by various factors.  At sea, issues include changes in food sources, bycatch and pollution. On land, the biggest threat to seabirds is the predation by non-native invasive animals of the eggs, young and adults.  Other factors include disturbance, persecution and other forms of predation.  Climate change could have a significant effect on some species, particularly those at the edge of their range.

On the islands the biggest issues are currently believed to be predation by rats on the burrow and crevice nesting seabirds such as Manx shearwater, storm petrel and puffin.  For other species such as kittiwake and the larger gull species, productivity studies indicate that the underlying issue looks likely to be changes to or availability of food at sea.  Food is also probably an underlying issue for common tern but this is masked by the effects of high tides and storm events inundating nests on their preferred breeding island.

Threats can act in combination so whilst some factors may be having an impact on breeding seabirds they may not be the primary cause but just a symptom of a wider problem. 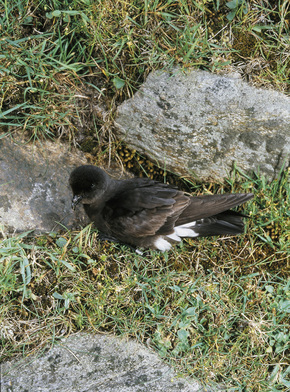 Many seabirds are vunerable on land.
RSPB rspb-images.com